Why should caring for and educating young children be women’s work?

We say it shouldn’t.

The job of caring for and educating young children is hugely important – for the children themselves, for their parents, and for our wider society and economy.

But even in wealthy, developed countries like the UK, where one might expect the greatest progress towards gender equality, early years education and childcare is provided almost exclusively by women, for low pay.

Only 3% of the people who work in early years education in England are male (Source: DFE Childcare and Early Years Providers Survey, 2021) – and that percentage has hardly changed in almost a quarter of a century.

At MITEY we believe that’s a problem: one that should be of concern to national government, local authorities, nursery providers and other early years sector organisations…one that calls for investment, strategic planning and political will, as well as grassroots action.

We think this is a matter of diversity and inclusion. Our children should be cared for and educated by a wide cross-section of the community: men, women and people whose identities challenge the gender binary; people from a range of ethnic, religious and cultural backgrounds; people with different sexual identities; people with and without disabilities.

It takes a village to raise a child. We say that includes the menfolk.

If you like what we’re saying, join us now.

We keep up to date with the latest research and best practice, and are available for funded partnerships with local authorities, nursery providers and other early years organisations. We can help you audit your processes; train staff; develop successful male recruitment campaigns; engage effectively with fathers and other male caregivers; and develop gender-sensitive working practices. Amongst others, we’ve worked with Kids Planet Day Nurseries, the third largest private nursery chain in the UK; Spring Childcare; and PACEY. To discuss possible partnerships, contact us.

Join the MITEY network to download our free publications, designed to help employers, careers advisers and others reflect on how best to support boys and men to develop careers in early years education. Check out the MITEY Charter here.

We root all our work in research evidence. Our project lead Dr Jeremy Davies was Co-Investigator on the prestigious ESRC-funded GenderEYE study; was deputy chair of the Department for Education’s Gender Diversity Task & Finish Group; and has written for various publications about the importance of gender-diversifying the early years workforce. As well as the MITEY publications available on this website, check out the Toolkit from the ESRC-funded GenderEYE study, for which he was Co-investigator.

What people say about MITEY

The MITEY campaign is doing something very important, which is championing the idea that maleness can and should encapsulate being caring and taking seriously one’s impact on society.

We need more men in early years so children may absorb a message that people of any gender can be a part of this crucial stage of their lives. Yours is a fantastic guide to what you acknowledge could be a ‘challenging journey’. Honest, thought-provoking, clear-eyed and accessible, it is a huge first step on the road to a truly representative early years’ workforce.

― Gina Rippon, Professor Emeritus of Cognitive Neuro-imaging, and author of The Gendered Brain

Since we launched the MITEY network in April 2019 it has grown to include more than 600individuals and organisations. We also have more than 900 followers on Twitter.

People representing more than 1,000 early years settings and other organisations have already signed the MITEY Charter.

Men still make up only 3% of England’s (and 4% of Scotland’s) EY workforce. By contrast, Norway’s workforce is 10% male, thanks to small but sustained government investment and coordinated strategies.

It’s time to change the world.

For many years there have been UK, Europe-wide and global initiatives aimed at encouraging more girls and women into male-dominated STEM careers. Much less attention has been paid to the equally important goal of encouraging more boys and men into traditionally ‘feminine’ occupations, including early childcare and education.

MITEY’s aim is to fill that gap. We’re working in an undervalued sector, and have no core funding, but we’re doing the best we can. If you can help us do better, let us know.

Our message to early years employers

Don’t just sit there – sign up to the MITEY Charter; download our resources; book some training; join the network; change your approach. If you have an idea for how we might work together, get in touch.

Our message to men

You CAN be the caregivers and educators, and the early years sector needs you…even if sometimes it’s not great at showing it. Check out our case studies; think about what training you might need; contact MITEY Charter employers to see if they need more staff; join the network. 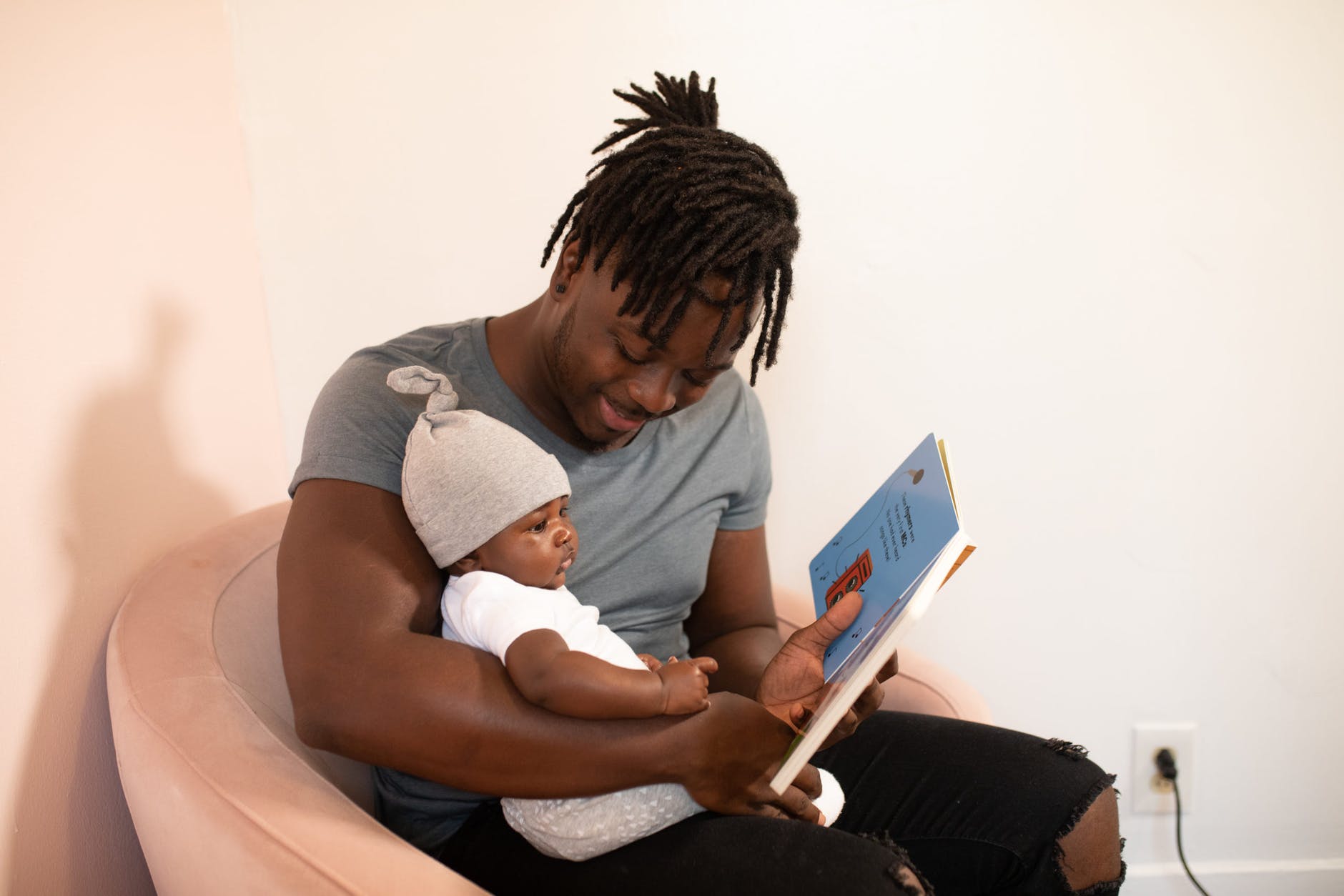 We are MITEY (Men In The Early Years), a campaign/ network working for a gender-diverse early years education workforce.

Check out our media coverage here 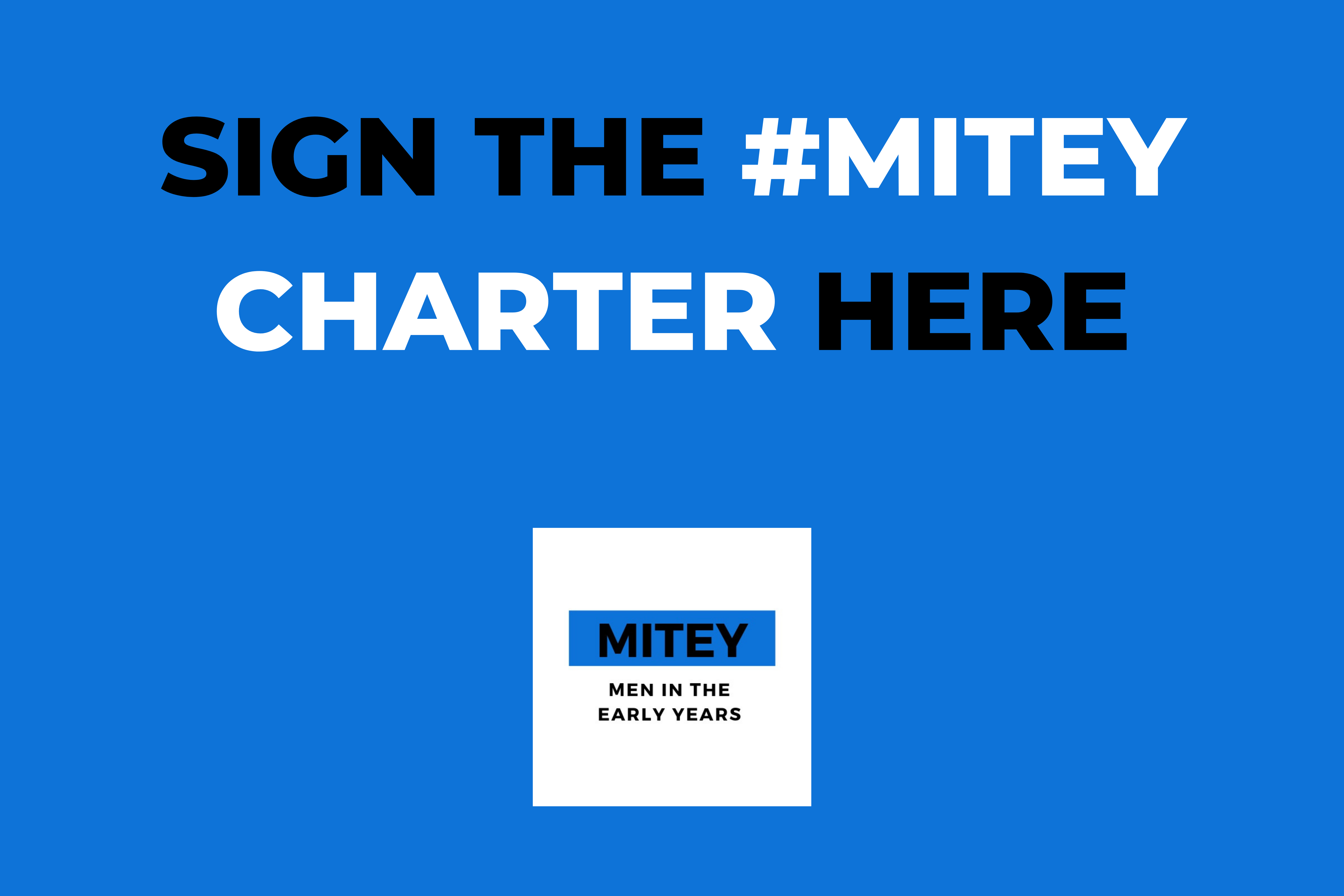 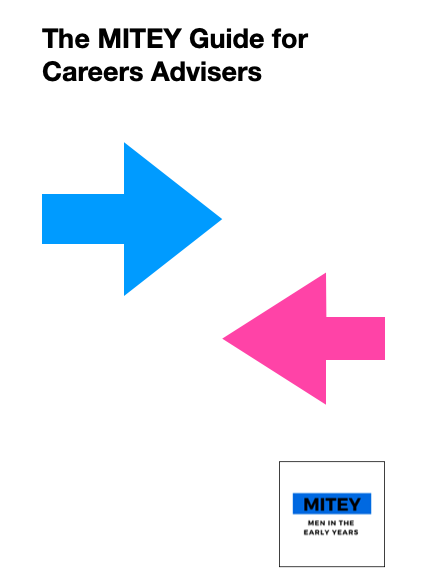